The spirit of the artist who changed and revitalised sculpture in the twentieth century, in Italy and elsewhere, is almost palpable in this section of the museum, leading us through a narrative that becomes material and form, enabling us to interpret the contemporary state of the international sculpture scenario.
Our visit takes us to the small rooms located at the eastern end of the cloister, facing onto the restored and redesigned garden with its refined feel. It is against this exquisite architectural backdrop that we can savour the work of Arturo Martini at the very pinnacle of his powers in this selection of compelling masterworks.

“Art is not interpretation, but transformation”
The first room contains Martini’s bronzes of the 1920s, small-scale plastics and reliefs of the same period, as well as drawings, graphics, and paintings. As well as seminal examples of Arturo Martini’s work, we also see the love of collection typical of Treviso, since many of these exhibits are bequests to the museum from distinguished collectors. 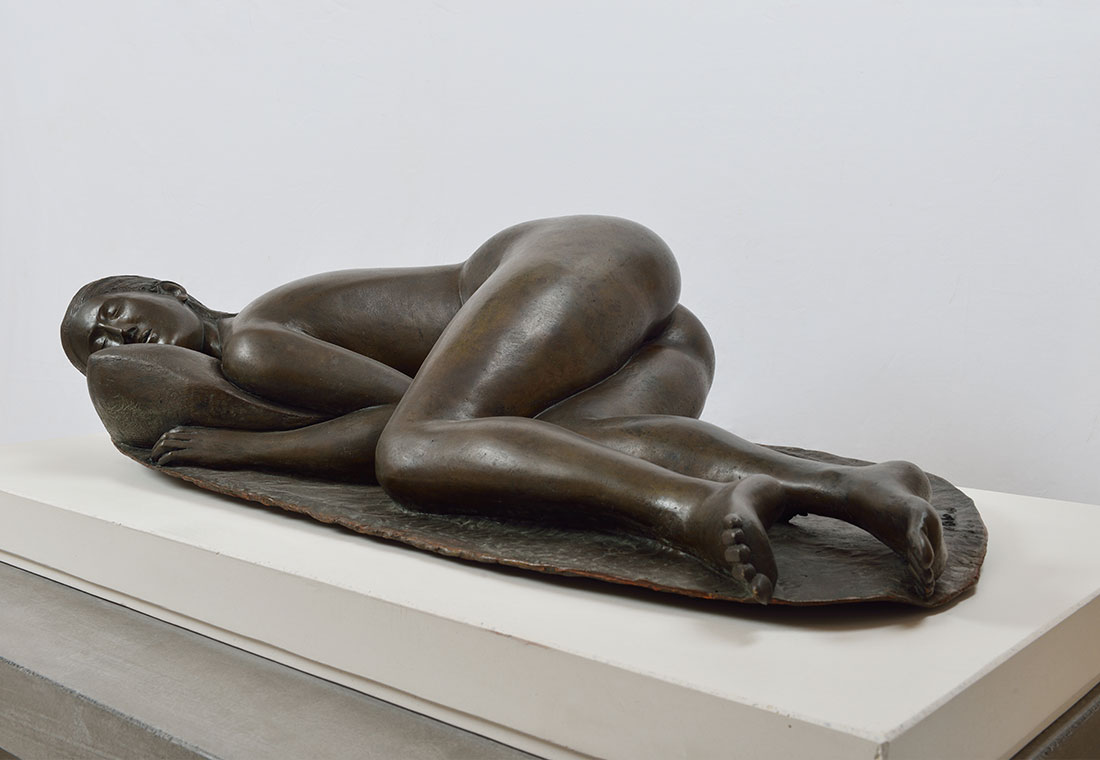 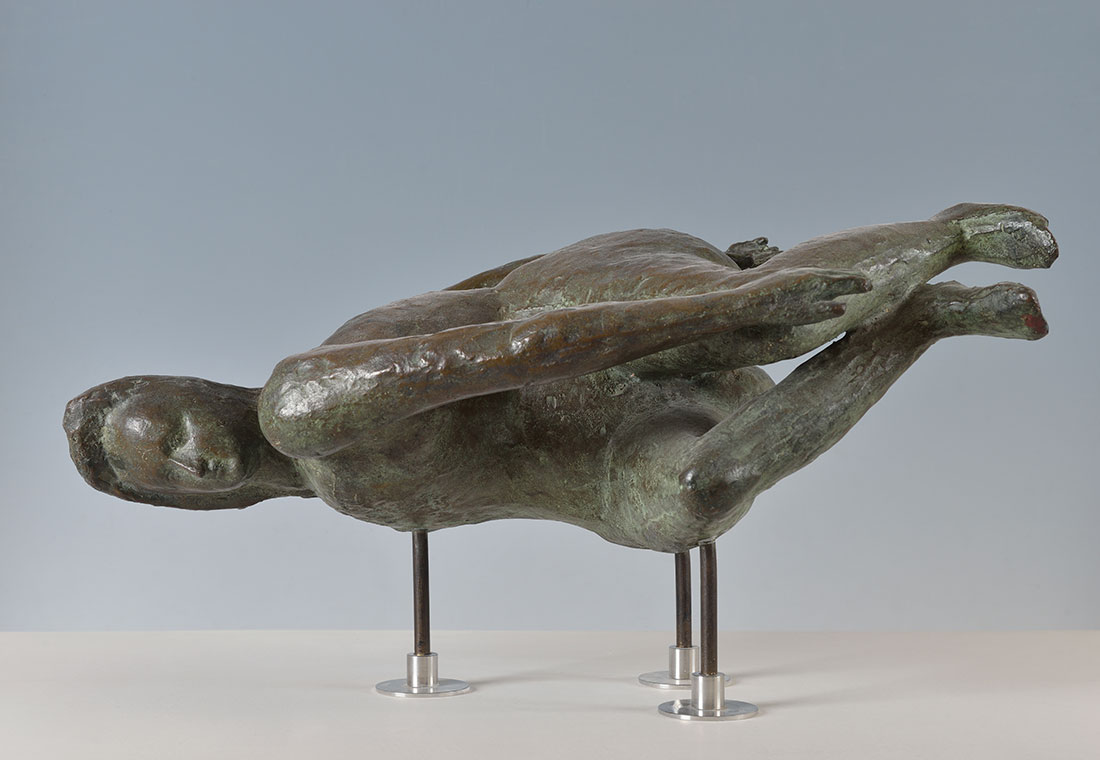 Splendid, for example, is the bronze dubbed La Pisana (the Countess Pisana of Fratta), donated by Maria Calzavara and Natale Mazzolà, major benefactors to Treviso. Not only did they donate many works by Arturo Martini and Nando Coletti to the city, but they also gifted the city library (Biblioteca Comunale), the “Raccolta Foscoliana”, which is a highlight of, and includes letters written by, the poet Ugo Foscolo (1778–1827) himself, as well as copies of his works.
Enthralled by the Countess Pisana of Fratta, the heroine of Ippolito Nievo’s 1867 novel Confessions of an Italian (Le confessioni d'un italiano), Martini’s sculpture La Pisana represents the sublime expression of her sensual yet graceful, bold yet beguiling, nature.
Arturo Martini was also, somewhat surprisingly, much taken with the cinema.  In his portrait of Lilian Gish, the “first lady of the silent screen”, we see the ethereal beauty and the psychological complexity that her face was capable of displaying. Martini was, justifiably, proud of the sensitivity he had achieved in this work.
Over a decade later, we find the same power and passion in his sculpture of the Woman swimming underwater (Donna che nuota sott'acqua), inspired by a scene from Nicholas Ray’s film The Savage Innocents, known in Italy as Ombre bianche. Seeking balance in the medium, the headless female becomes a metaphor for being suspended over the void of the present, and yet striving for the future that is at hand. 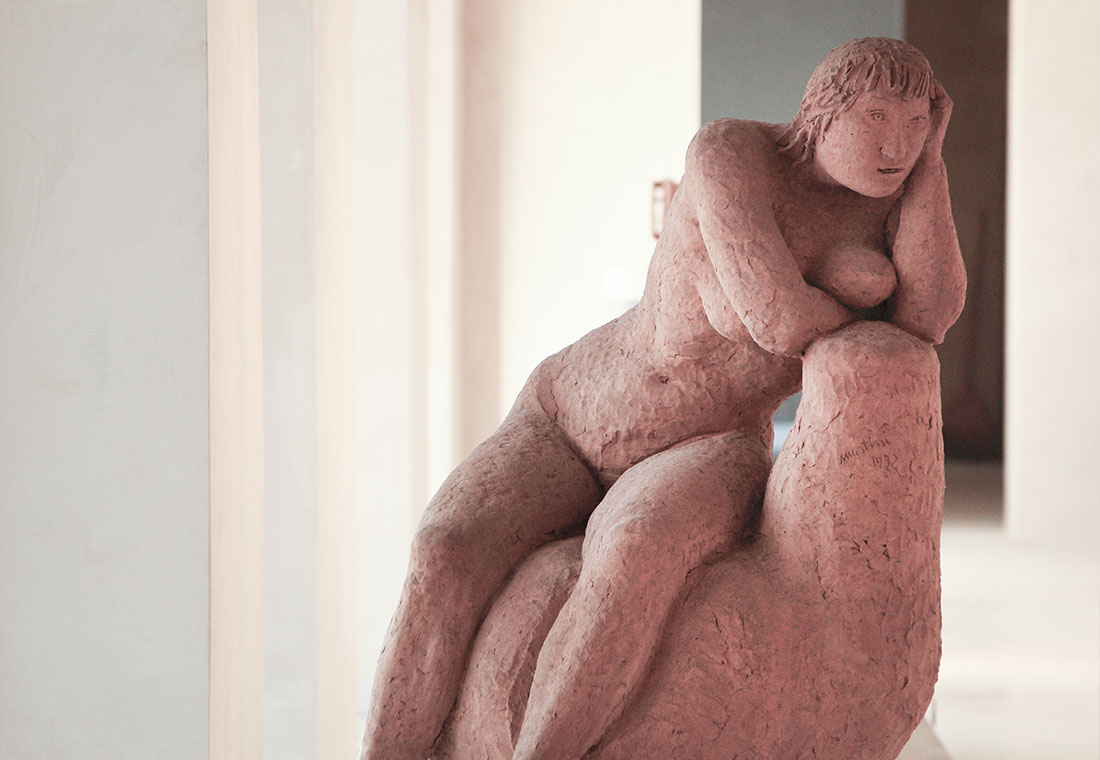 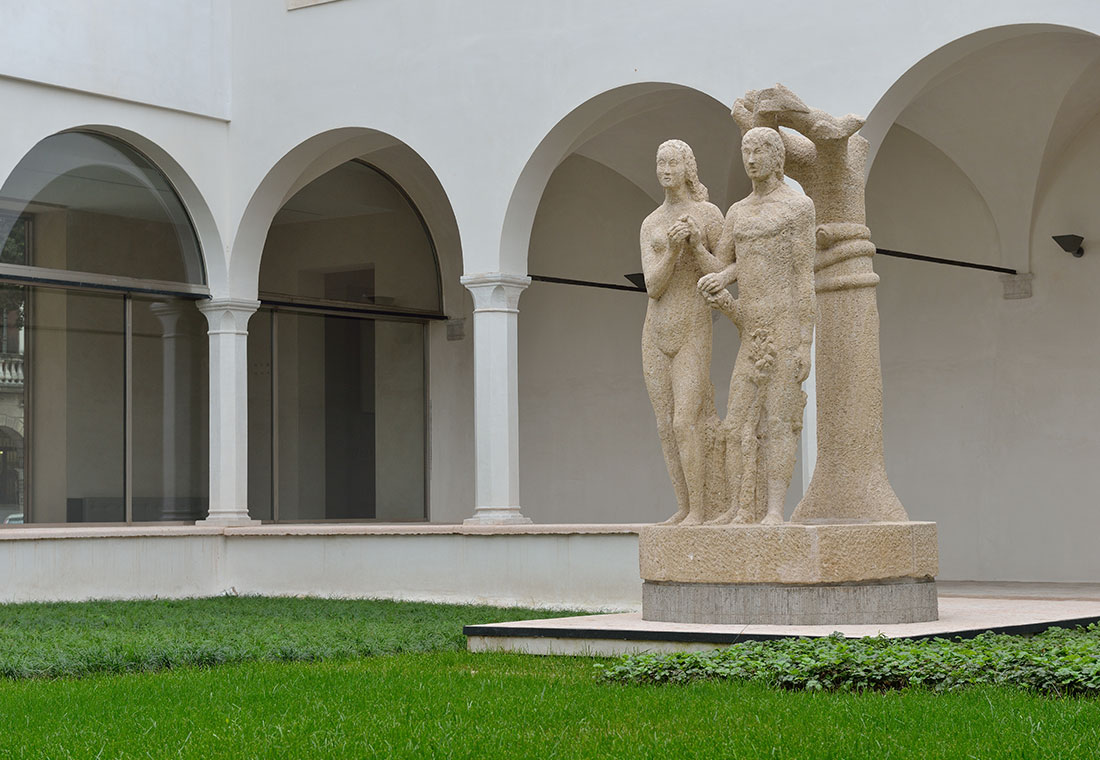 The greatness of Arturo Martini, undisputed in his pursuit of innovation  and his quest for expression, is also documented via his small-scale sculptures, that only look like minor works but are anything but: one such example being the such as the Small Nativity Scene in coloured majolica (Presepe piccolo in maiolica policroma).
These pieces express the same staying power and curiosity that he applied to every material he used, and served as experimental works for future iterations when Martini joined company with Mario Broglio’s “Valori plastici” movement.

"A work of art is such when it breathes, a volume created from the void it implies".
Bathed in the subtle light of the cloister, in a silent space that feels cut off from the outside world, we see one of Martini’s most poetic masterpieces: the Venus of the Ports (La Venere dei porti), the naked form of the seated prostitute conjuring an atmosphere of waiting, solitude, boredom and sadness. Acquired by Treviso municipal council in 1933, this is one of Martini’s most outstanding terracotta works, created on the cusp of the 1930s, when the artist was at the height of his powers, melding forms inspired by the classics – from Etruscan and Ancient Greek art -- with those of the masters of the thirteenth and fourteenth centuries, as well as the latest ideas regarding shape.
For Martini, drawing, graphics and painting provided another source of ideas, complementing those he was exploring in his sculptures, as we can see from his works called cheramografie. A technique -- and term -- that he invented (not to be confused with ceramography), this involved creating an intaglio printing plate using a clay (as opposed to zinc or copper) base, during what came to be known as his Ca’ Pesaro period. In addition, there are his “neomedieval” graphics, of religious inspiration that constitute the last part of this section.
In his indefatigable quest for the “truth”, at the end of the 1930s, Martini took to easel painting “en plein air”, the better to record and document, in some cases from memory, sculptures that has been particularly important to him in his technical and artistic development.