The appeal of ancient roots

Covering three hundred thousand years of human habitation in the area between the Prealps, and the rivers Piave and Sile, culminating in the development of the city of Treviso, this section displays artefacts in chronological and geographical, as well as functional, order.
Plenty of surprises await as we explore the rich heritage of the city of Treviso, where the past comes to life, an in-depth plunge into the past, of history as the day-to-day, what went before, piece by piece, shaping contemporary culture.
On the lower-ground floor, visitors can see the pre- and proto-historic collections, one outstanding example being the bronze swords, which testify to the placing these either as grave goods or as votive offerings.
While the oldest examples, showing a central-European influence, are the Sauerbrunn and Boiu types, dating from around 1600 BC, we can also admire others, manufactured through to the iron Age, in the typical “antenna” style. These are either of Etruscan origin, or are locally made copies. 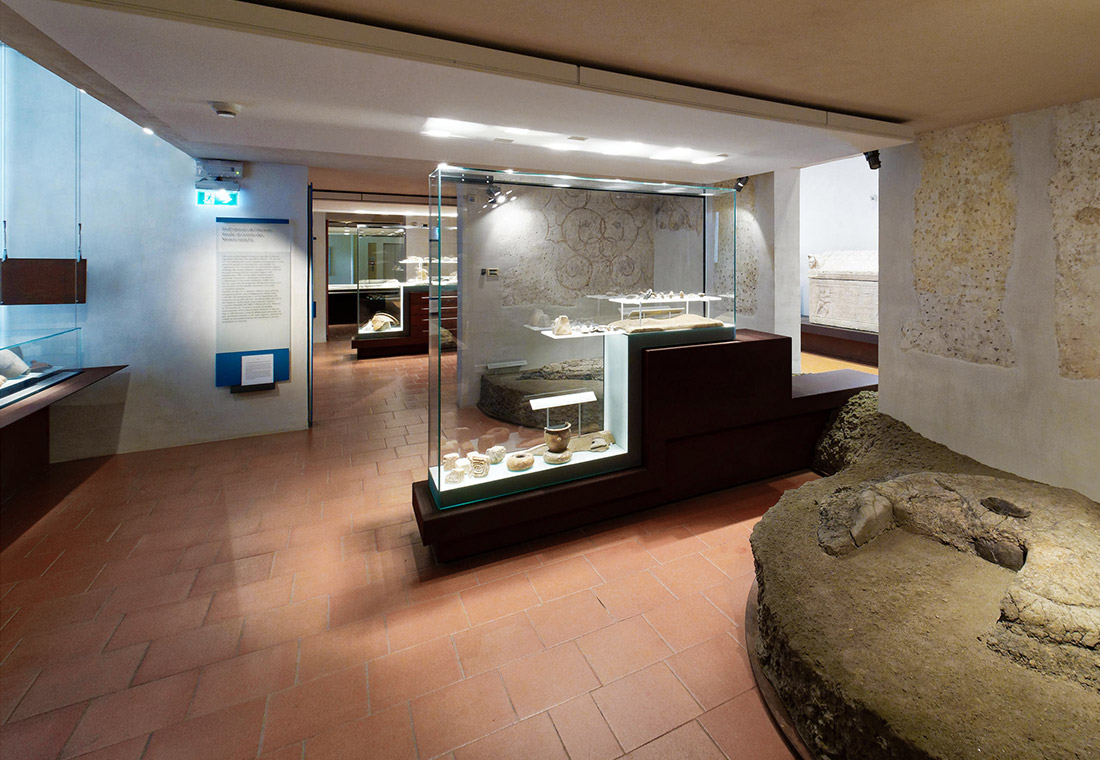 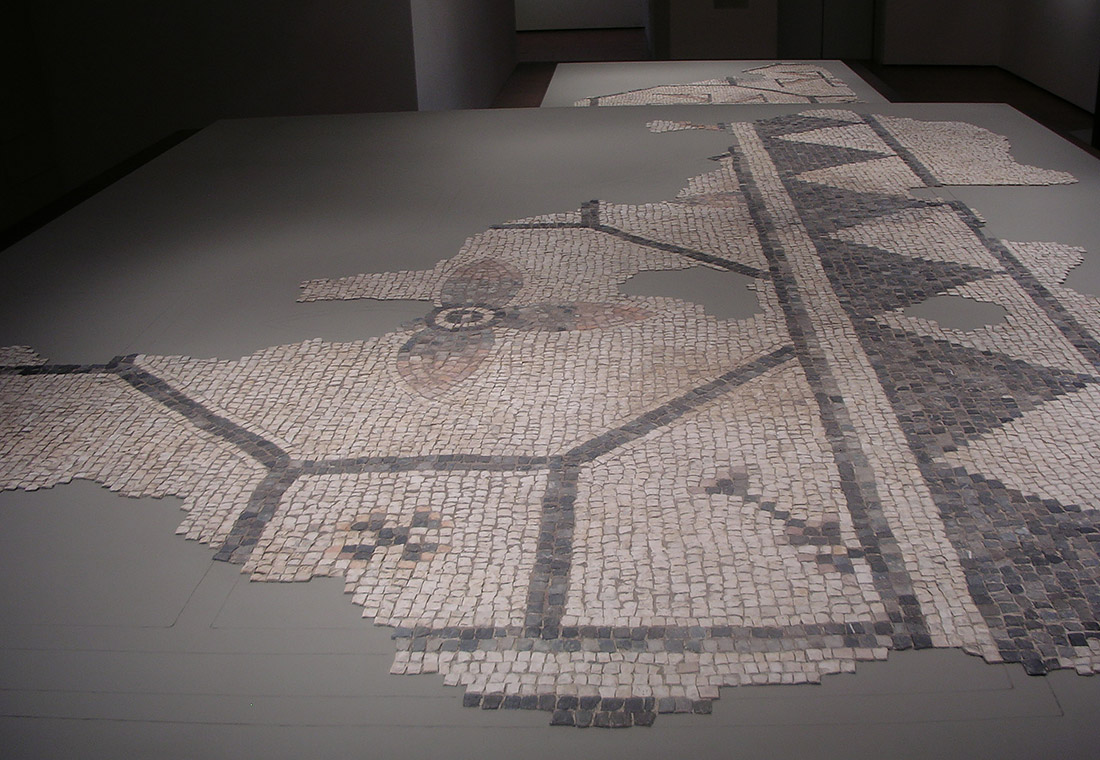 In the vast necropolis at Montebelluna (20km from Treviso) were found some extraordinarily fine grave goods, one of these being a remarkable cista, or box or basket used for various practical and mystical purposes. cista decorated with a scene of a farmer ploughing, from the 6th or 5th century BC. The image is embossed on a sheet of bronze, with detailing executed with a burin engraving tool. The same technique can be seen on the five votive disks depicting a key-bearing (clavigera) goddess. Many examples of such disks, dating from the fourth to the second centuries BC, have been found in the Veneto area of north-eastern Italy, attesting to cultural contacts with the Celts.
On the ground floor, in chronological order, we can see the key finds of the archaeological digs effected in the city centre of Treviso from the 1950s to the present day. These cover a period from the Late Bronze Age and the Roman era, including the top surface of a ceramic oven (10th-9th century BC ), a  number of large circular braziers of the same period recovered from old homes during an excavation in nearby Piazza Santo Pio X. The same dig brought to light the bronze votive plate (laminetta featuring embossed female key-bearing figures, with burin detailing (4th-3rd century BC). 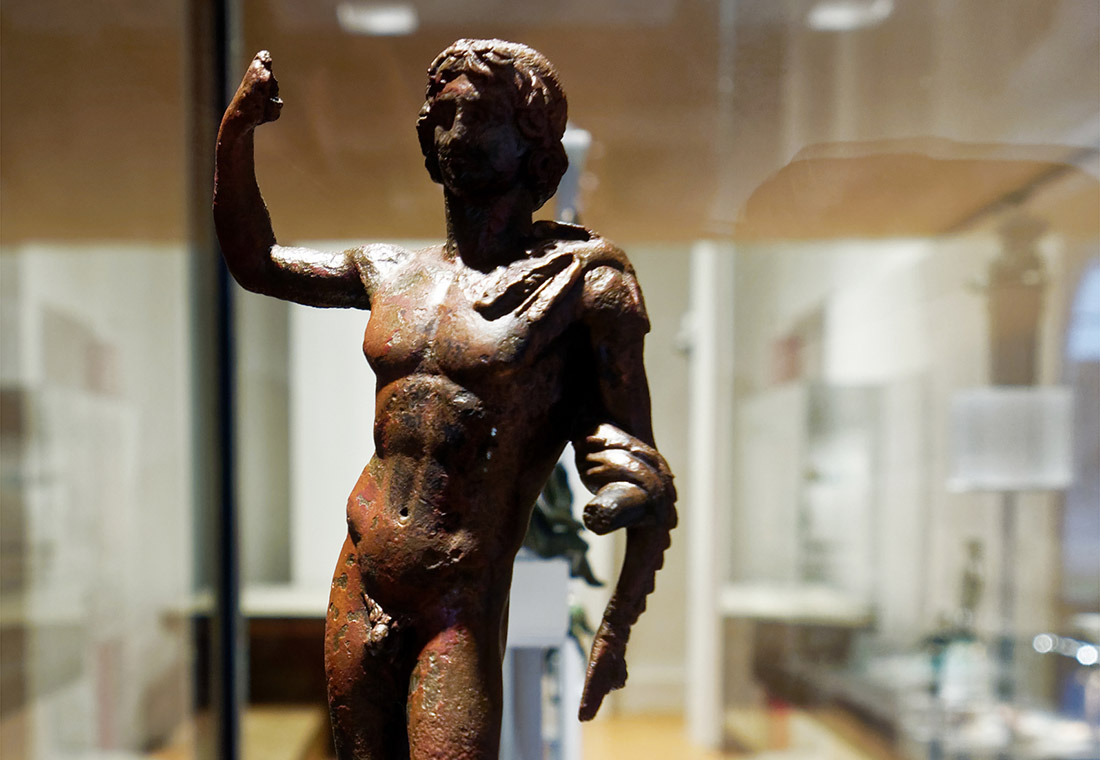 Roman era burial grounds in various locations in the area around Treviso have rendered up exquisitely crafted glass objects, while the many inscribed monuments, as in the case of the one referring to the city magistrate (magistrato cittadino), C. Sevio Fusco (1st century AD), provide evidence of street names, as well as of the political and civic layout of the municipium of Tarvisium.
Our visit concludes in the corridor parallel to the Grand Cloister, where we can inspect Luigi Bailo’s collections of antiquities These include small bronzes, and items in stone from both the Greek and Roman eras.
The collection benefits from a comprehensive cataloguing project, as well as a thoughtfully planned display strategy, coordinated and managed by the Soprintendenza per i Beni Architettonici e per il Paesaggio del Veneto Orientale and the Soprintendenza per i Beni Archeologici del Veneto.